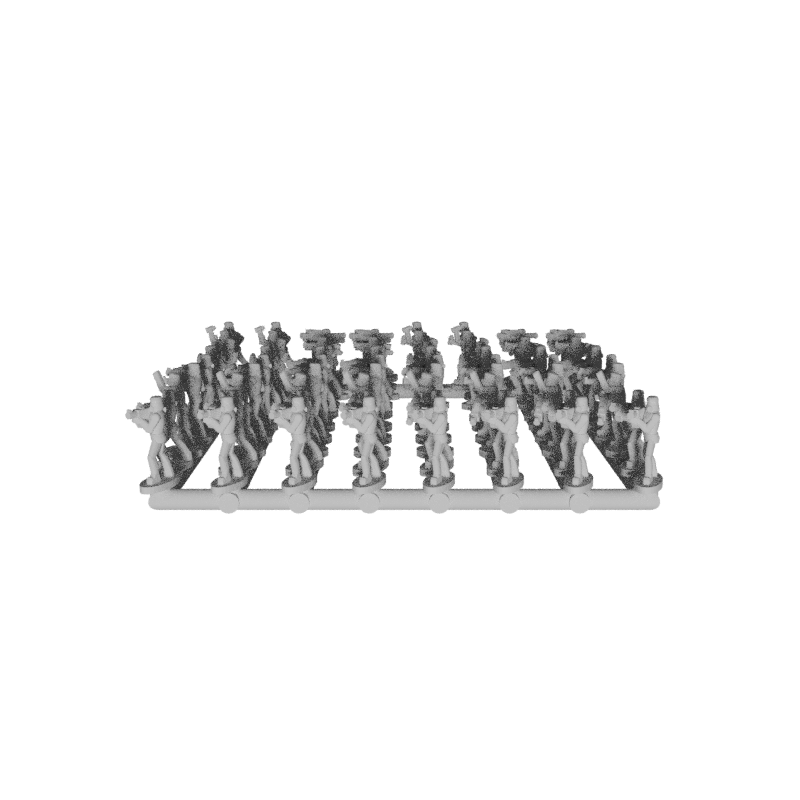 (Note as the AK-447, RPK-176 and FIM-292 are based on their modern-day counterparts, the GLA infantry is also suitable for irregular modern troops.)

GT infantry is often a haphazard mob of irregulars, poorly trained to the point of nearly being at conscript level, but making it for it with sheer blind zealotry which makes them easier to kill than to break.

Most GT infantry squads are large, typically around ten. While armament is often somewhat varied, the majority are armed with the ubiquitous AK-447 assault rifle, which harkens back to its distant ancestor in terms of durability, performance and simplicity. For anti-armour, the most common weapon carried is the RPG-55 LADs (Light Anti-armour Disposable). Support weapons are commonly the RPK-176 LSW and the FIM-292 Stinger multirole missile launcher. All of these weapons are notable for their prevalence in military surpluses, the black market and even open market. As always, actually tracking down all of the GT’s acquisitions has proved impossible, but given the relatively simple technology involved in all these weapons, it is a near-certainty that the GT manufacture a larger number of their weapons themselves.

More disturbing are the smaller units – typical about four to six – of what even the GT internally call “terrorists.” These are nothing more than suicide bombers, laden down with no weapons aside from strings of volatile explosives. They are utterly fanatical and fearless, charging headless into battle. This makes them easy to mow down – especially since the typically volatile explosives have a tendency to go off it hit – but on the rare occasions they make contact, they can be devastating to even armour.

GT terrorists generally are not mixed in with regular GT infantry, but often form their own units. They are most often found piling into simple civilian cars, turning it into a dangerous hazard to even a battle tank if it actually can strike one.

The terrorists are among the most common weapon deployed outside of battle by the GT, attacking civilian and military targets. As with almost all the GT’s operations, such attacks tend to fail utterly or succeed horrifically, with little margin in-between.