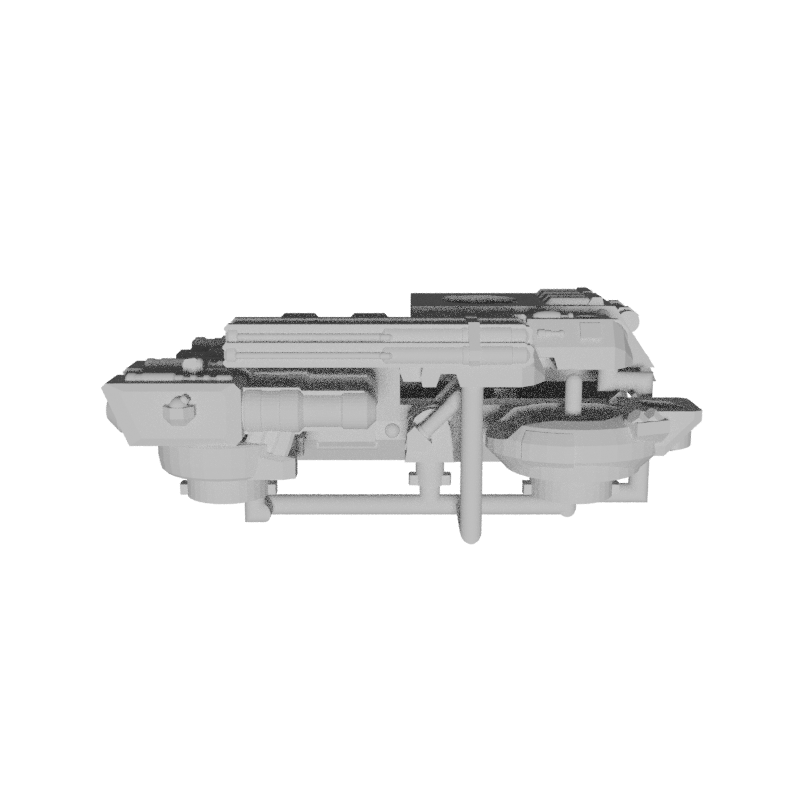 The gun barrels are designed to be removed and replaced during a game. Make sure that when painting, the guns and the slots in the turret where they sit are all painted. They are designed slightly loose when unpainted, so that when painted, the additional thickness of the paint will provide enough friction to keep them from sliding around.

The third module of the Turma is the tank module. This houses increased power generators and turret with a standard PD lazer turret. The main turret has nano-replicator weapons in two patterns. The first of these is a heavy particle accelerator cannon, configured for continuous fire. This weapon has less overall power than a similar sized gun, but has the advantage of being able to tear through physical defences (kinetic, ablative, reactive or otherwise) with equal facility. The second is four disruptor pulse cannons, giving the Turma tank a high rate of fire (if not as good as dedicated rapid-fire weapon like a gatling). The other main advantage of this mode is its ability to strip shields more effectively.

The final module is the warhead launcher module. Externally the same as the tank module on which it is based aside from the turret, internally, much of the space is dedicated to the warhead launcher’s magazine. A typical load-out consists of 10 guided missiles, 20 standard torpedoes and 10 blast torpedoes for area suppression. The warhead launcher turret is also provided with a laser PD array for additional missile protection.