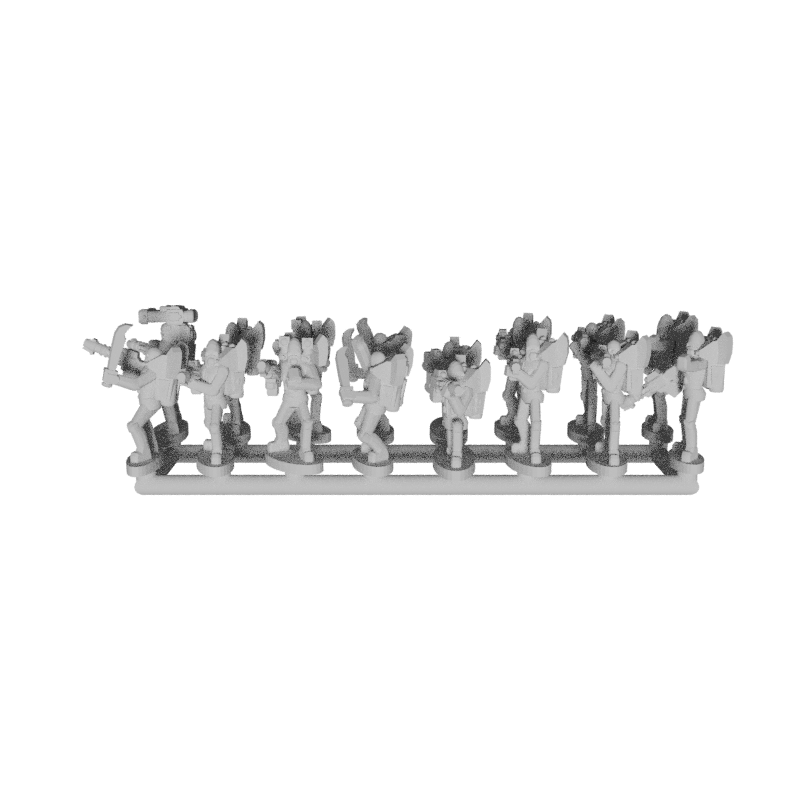 Drop Troops or Drop Infantry are from army (i.e. ground force, as opposed to navy) branch of the Aotrs. The Drop Troops are so-called because it is their primary role to be dropped in from orbit and act as strike troops, in the same way paratroopers operate. Like such, they are usually better organised and more skilled than the already skilled Line Infantry. Their armour is heavier, as it must be to withstand the drops required.

Drop Troops are equipped with Heavy Body Armour. It is not quite Powered Armour, but comes very close – technically only in that the armour itself is not equipped with the strength-enhancing exoframe. Like the Medium Body Armour, Heavy Body Armour is made of synthetic plasteel plates and is fully sealed. It has reinforced plating outside, and a large backpack module. This contains a pair of descent engines, a limited shield generator and steering vanes. The steering vanes are used to help control the drop when the Drop Troops are orbitally inserted. The descent engines’ primary job is to slow the drop from orbit to a survivable level, and so they are optimised for a long duration slow-burn usage, rather a short, sharp thrust like a jetpack. Nevertheless, the Drop Troops, by tweaking the output settings, can use them as impromptu jump packs. This is not entirely without risk, as it requires firing the engines at a high level of thrust rather close to the trooper’s legs. True flight is not really possible without significant modifications – though those modifications are not unheard of among these elite troops.

Some variants have additional sensor equipment built it, including additional sensor pods. The backpack modules are also configurable. The helmets have the same HUD and computer system as the Medium Body Armour.

Drop Troops frequently have to, by dint of their frequent insertion method, travel lighter than Line Infantry. While they typically use the same coldbeam rifles (Mark 14E or Mark 18) and support weapons, they do not typically carry Snake Launchers. Instead, they are more reliant on the squad’s spellcasting capabilities for anti-armour attacks (Lightning Bolt being the most common.)

Some Drop Troops, however, have sought to improve their offensive firepower in other ways. The power generator used by the Heavy Body Armour is the same version as used on the full Heavy Powered Armour (HPA) suit. The lighter draw means it has additional power spare, even when using the internal systems. It was discovered by the ever-enterprising Aotrs soldiers that, if the steering vanes are removed, the same mounting used for the sensor pods can be used to lock-in shoulder-mounted weapons – the shoulder-mounted plasma-pulse cannon equipped to the War Droids is a perfect fit. (Not entirely co-incidentally, given the similar ergonomics.) Suits so equipped lose a fair amount of mobility on the ground and flight stability, but for the most skilled and hardened of Drop Troops, this is considered a minimal loss for the additional firepower gain.