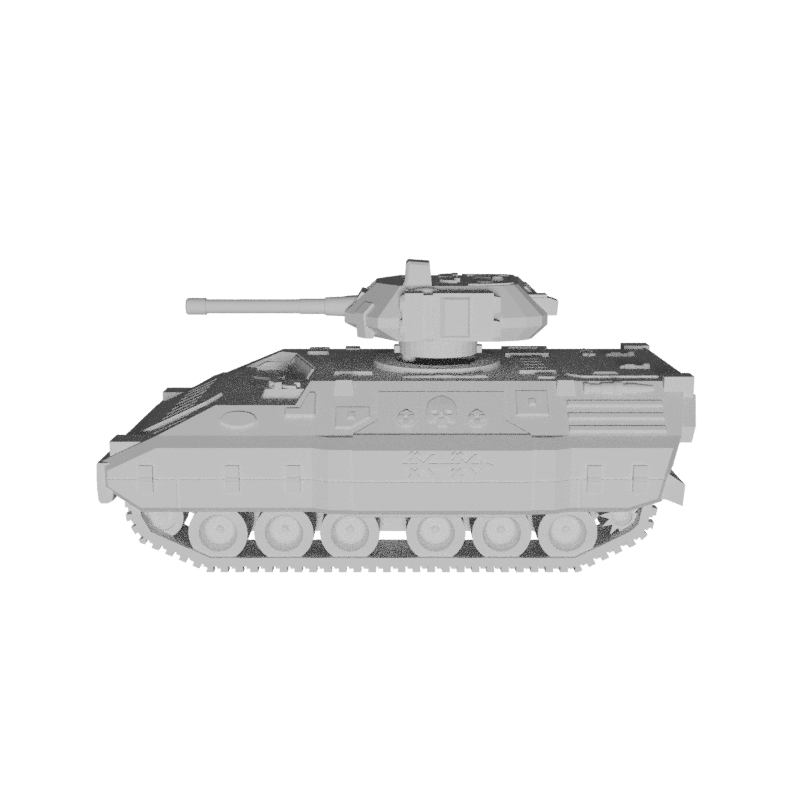 The Distant Thunder is an older AFV, but one still very much on the front line. Given its name because the sound it makes when moving, its vast size means, despite the (then) lack of shields, the Distant Thunder is heavily armoured and very difficult to kill. It has front and rear doors, and is large enough to transport a full platoon of 32 troops or even small tanks. It has firing ports in both sides, with mounts for coldbeam support weapons. Its main weapon is a 240mm Rocketgun Cannon, and it has several drums of ammunition for normal anti-tank rounds as well as homing Rocketgun rounds. It has a coaxial warhead launcher (typically loaded with four Skull warheads) and a secondary heavy coldbeam turret.

The Distant Thunder is big enough and heavily armoured enough – including its sturdy, armoured tracks – to simply roll over and crush most obstacles; up to and including most regular main battletanks, if unshielded. However, if one is eventually untracked, it typically requires a major undertaking to get it underway again. The Distant Thunder’s size can also work against it in other ways – being as tall as a second-story building means the Distant Thunder can attract a lot of fire. It also cannot cross many light civilian bridges, as it is simply too heavy.

Distant Thunders often serve as a command vehicle, as the equipment required was already present as a standard feature, given the negligible size and weight requirements compared to the vehicle’s mass. This also tends to keep them more out of the way of attack.

For some years, was some consideration to implement an upgrade to add shields, though the projections meant that the armour would have to be considerably lessened. However, when the new shield grid matrix pioneered on the Vampire became available in 2342, this provided a better option. A new, modern power core provides more power for the same mass – enough to run a shield network on the new matrix. While this is only as strong as the grid on the Fallen Soul (thus about two-thirds the strength of the Storm Cleaver’s or Revenant Spear’s shields), without the sacrifice of armour, the new shields make the 2342 Distant Thunder a very tough nut to crack.