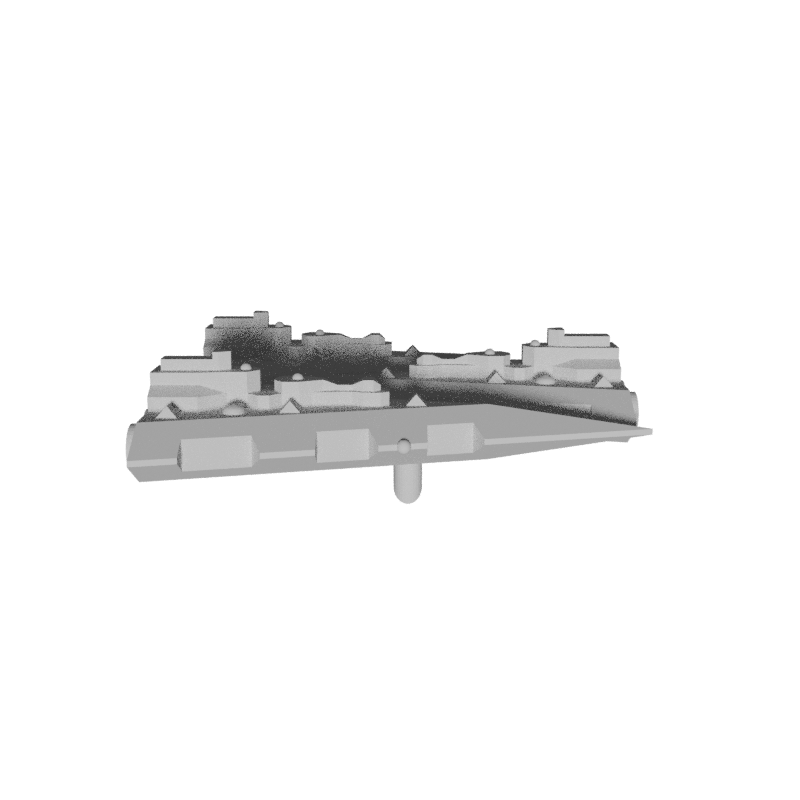 The workhorse of many small navies, the Delta Destroyer is one of the most popular vessels in the Delta series. Half the size of the Delta Heavy Cruiser, the destroyer has a reputation for solid and reliable performance that goes all the way back to its first introduction. It is a common sight throughout human space, fulfilling every function conceivable.

The stock Delta Dreadnought sports 600TXq shields, but only light armour (30TXq). It sports a combined 900TXq output of point-defence lasers, making even the stock version a good escort vessel. 585TXq of lazer cannon batteries complete its offensive arsenal. The drives push it up to an acceleration of 13.6 mc and 165 MEUs, above average performance for most vessels its size.

The Herosine Imperial Fleet uses two main classes of destroyer based on the Delta hull. The Caracella (CC/DD) is identical to the stock version apart from its weapons. The point-defence are upgraded to military-standard 472TXq output lazers (485TXQ for the Caracella-I Class Destroyer (CC-I/DD)), but only half the number of mounts; a hangar for a pair of Screen Drones makes up for the lack. The main weapon is a 9-tube missile launcher, with a plentiful supply of 88 conventional and 72 short-range antimatter missiles. This is backed up by a single 300 000km accuracy envelope disruptor battery.

The second version is Caracella-I S Class Scout Destroyer (CC-I/DD-S). The Scout Destroyer is a variant of the Caracella. It mounts an array of additional sensor and communications systems, serving as the primary sensor vessel for the Herosine Imperial Fleet. However, the emplacement of the sensor array necessitates reducing the disruptor battery to a lighter 180TXq system. The engines are reduced in size, dropping about 20% performance. However, as the Scout Destroyer is intended to be primarily fighting at range, retaining the missile launchers was considered more important than the loss of manoeuvrability.

There is some indication that the Caracella-I S will be one of the first refits to 6th generation technology. Aside from the obvious improvements to 6th generation sensors for its primary role, this would allow it to carry the new point-defence missiles, further offsetting the manoeuvrability downgrade.