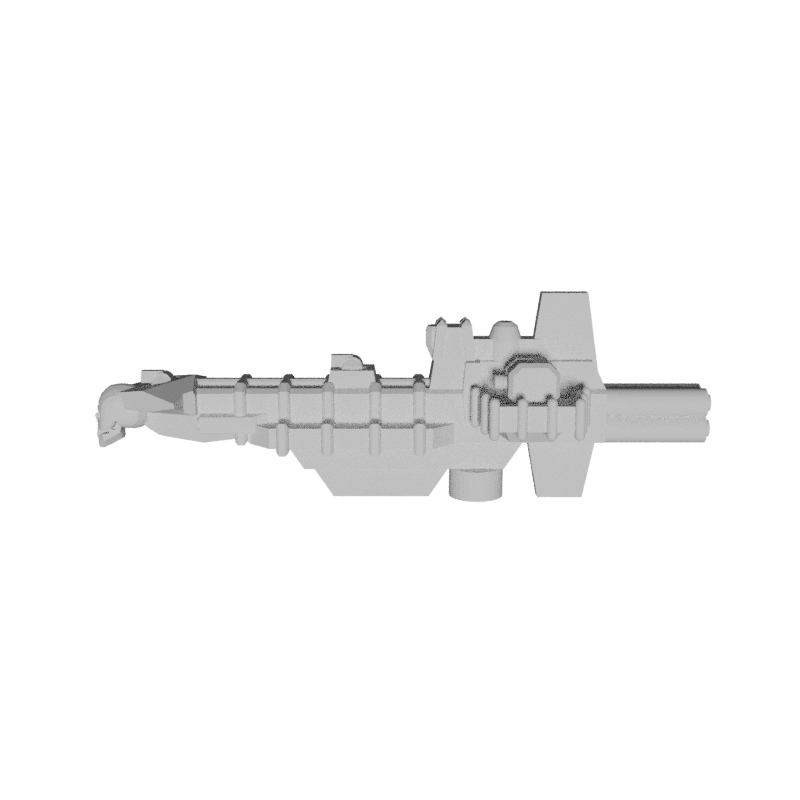 The Fettered Star is a general purpose medium cruiser, typically serving as escort to other vessels (though it is not a dedicated escort vessel.) It is armed with a mix of weapons.

It carries mid-range anti-starship coldbeam turrets, and a mix of short and long-range light coldbeam turrets for point and area defence. For longer ranges, it carries a pair of warhead launcher either side of the armour bow. A point-electronic counter measures system supplements its active defences.

Finally, it carries a pair of energy beam turrets,

The energy beam weapon system used by the Aotrs fire a coherent beam of pure energy (discharging white in visible light). They have a very high energy output, but require charging when fired at maximum power. They also decohere quite quickly compared to a coldbeam of the same mass, but tend to be built as much larger weapon systems. A powerful energy beam – such as found on the Midnight dreadnought – is capable of slicing an enemy ship in half, though their effectiveness is reduced significantly by shielding or heavy armour.

The turrets on the Fettered Star are much smaller than those of the Midnight, a third of the size. Though the Fettered Star can use them to slash enemy ships at close ranges, the Fettered Star’s small arrays are used for a second purpose. An energy beam array’s enormous power output can be harnessed to fire a much longer sustained beam by firing at about one-third the power output. Though it has the same decohering issues over range, in the effective range, this makes the weapon considerably more accurate because of the longer firing time. In this mode, light energy beam arrays have often been used for precision attack work, picking off individual systems from an enemy ship. (Small energy beam arrays are sometimes called as “needle beams” when used in this fashion.) While the larger arrays as just as capable, for this sort of work involved, multiple smaller arrays typically allow more chance of hitting the target. So the Fettered Star, rather than carry a single heavier beam, carries a pair in turrets either side of the hull.

With appropriate munitions and support, the Fettered Star can make quite a capable capture-assist vessel with its energy beam arrays, though their small size means it has to get close. The Fettered Star’s diverse armament makes it a jack-of-all-trades but master of none.