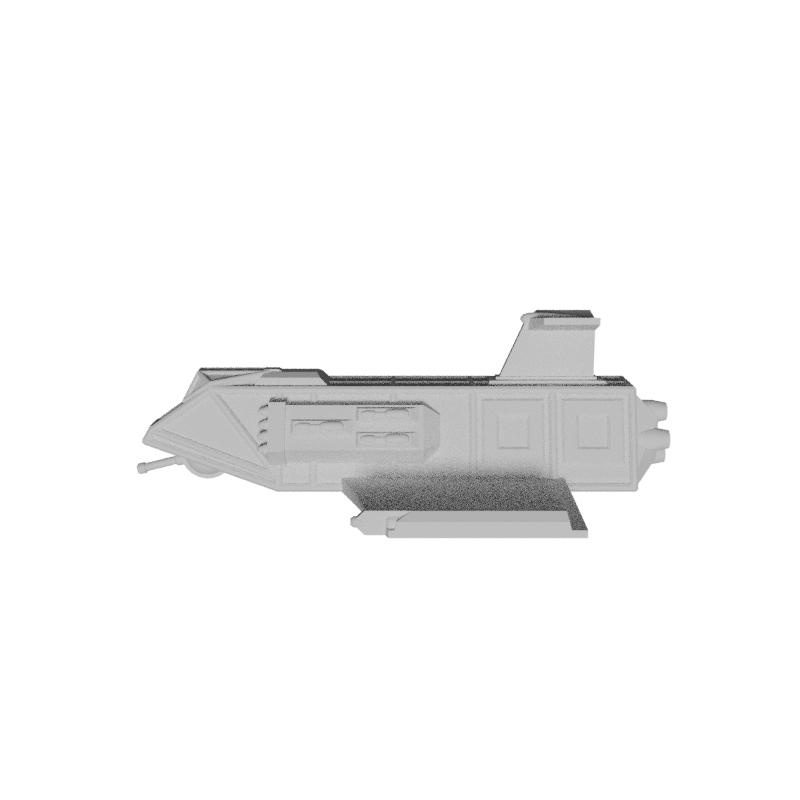 The Khazd Dûrn Attack VTOL was deployed into service on the eve of 2342 a scant few weeks before the succession of the True Divinity from the Zirakthargûm Divinity. Given the woeful development of the Dor Gûn, it was clear the Divinity needed an attack VTOL more suited to the task.

The Khazd Dûrn designed as an attack craft from the start, had an accelerated design cycle, finalised due to the costs of the Divinity War and ensuing conflicts. Leaving the stand-off missile role to the Dor Gûn – the only one to which is it suited – the Khazd Dûrn is designed for close support.

The Khazd Dûrn’s armour is stronger, for the most part, than the Dor Gûn’s, though it lacks shield generators. Speed and manoeuvrability are much improved – in many ways, the Khazd Dûrn is closer to an atmospheric fighter than straight VTOL and is an adequate, if uninspired dogfighter.

The Khazd Dûrn’s main armament are two missile pods, mounted either side of the hull. The missiles have the same range, but a lighter payload than those on the Dor Gûn, but the Khazd Dûrn carries 14 in each pod, 28 in total, as opposed to the Dor Gûn’s 16.

Two fixed autocannons on the wingtip give the VTOL a strong direct-fire punch for those occasions it is forced to enter an aerial battle. Six heavy machine guns, three mounted on each missile pod, provide some additional firepower.

The chin turret had to be downgraded, however, and only carries a single PD autocannon.

While the performance and reputation of the Khazd Dûrn is well regarded compared to its predecessor, the rushed development cycle has left it with a few teething troubles. Several shortcuts in the design stage mean it requires extra maintenance time. These flaws are likely to be iterated away in refits and additional production orders. More pressing is the missile pods and machine gun’s exposed position. Despite the armour covering the pods, they present a prime target to enemy weapons. Further, a few months after it entered service, one or two instances have been discovered when a penetrating hit to the pods caused an ammunition explosion. This was eventually traced to substandard safety precautions in the machine gun magazines. These issues were apparently known by at least some of the design team, but the reports were ignored by the project lead in favour of getting the craft operational to please his then superiors, and after the former High Clerics were deposed, the reports had been long buried. Frantic field repairs are being made, but the job requires dismantling a significant amount of the craft to be able to fix the comparatively simple issue. This is ironically often not possible for units that have been deployed to the front lines where the refit is most necessary, whereas units assigned to garrison duties have ample time to do so.