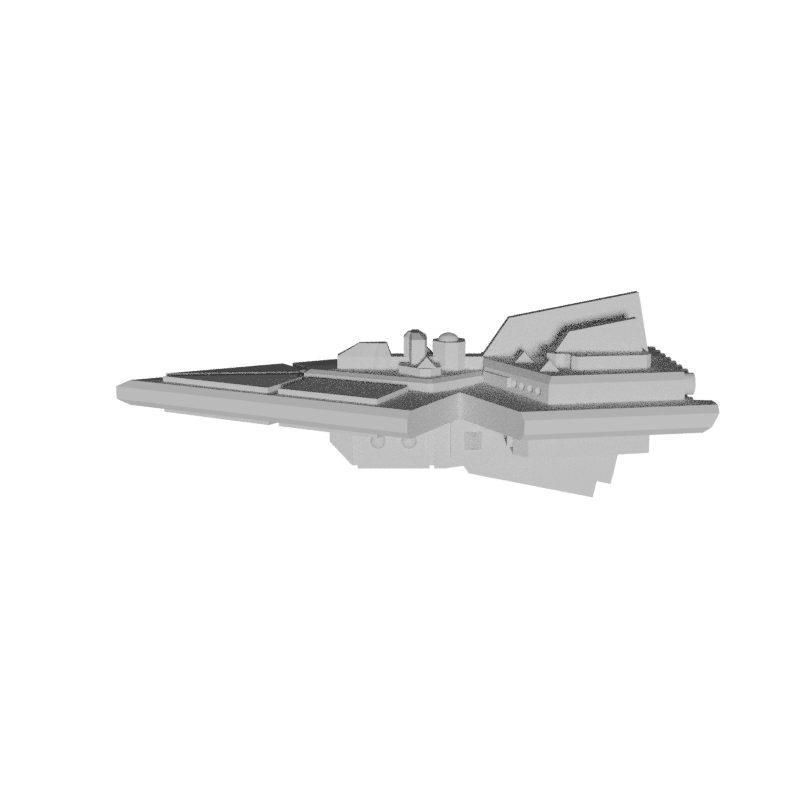 The destruction of Solarwolf Shipyards in the early 2320s was a great loss. A high-tech independent company in neutral space, Solarwolf had been formed in the late 23rd century by ex-military contractors from three of the major human powers, including the Japanese Empire. The company’s only shipyard was attacked and destroyed in early June in 2321. The shipyards simply stopped responding one day, and when a Nomad-class transport from the Saturn Syndicate Authority arrived on a routine supply drop, they discovered the whole facility has been obliterated. The attack was either so sudden that no distress call was made, or it was actively jammed. The identity of the attackers has never been determined. The Cybertank’s first new Incursion after a fifteen year gap had begun, and it was initially thought they were the culprits. Analysis of the debris was performed almost too late to be of use due to jurisdictional issue over who should investigate, and only revealed the damage had been caused by heavy lazer weapons, which the Cybertanks don’t use. Both the Herosine and Japanese Empire certainly had the most motives, though again, such lazers are not their fleet’s primary armaments. The leading candidate was the top-technology-tier Blasted Legion, though given the Strayvian Dominion had been quietly active in the subsequent decade, they are another possibility – or it could have been an entirely unknown race. The truth will likely never be known.

Solarwolf’s most famous design was the Devastator Heavy Cruiser, which while never as popular as its GDH counterpart had many proponents. While not as easily modified as the Deltas, it had the advantage of using the latest technology, on a par with the major powers. Since that tragic event, the existent Devastators have been slowly lost due to attrition or cannibalised for spares. Most now serve in second-line operations or as merchant convoy escorts where they are at low risk, for it is becoming increasingly difficult to replace the damaged parts.

In 2330, at the behest of the Herosine Empire (or rather on behalf of interested senators with a financial incentive), General Designs Hulls has used the same retro-engineering used on the Cybertank Assimilators to create the Delta hull series to produce the Devastator II Heavy Cruiser. Slightly larger than the original Devastator, it can perform the same mission profile. While GDH technology was not quite as advanced as that of the major powers or Solarwolf Shipyards when the Devastator II was introduced, the newer GDH design used standard components, meaning, like all GDH vessels, it is much easier to configure the basic hull and to repair and maintain. GDH almost immediately received several orders from powers, both major and minor, to replace their now aging Devastator hulls and the Herosine Imperial Fleet made purchases of their own.

The new hull is slightly larger than the original. The Devastator II still shares the Devastator’s large engines and manoeuvrability profile, hitting 11mc and 125 MEUs, above average for a heavy cruiser. While the armour integrity capacity is a standard 1000TXq, the shielding is superior – a 40% increase over the original with a rating of 1400TXq.

The stock version’s weapons load, however, had to be substantially reworked from the Devastator. Solarwolf had access to Japanese Empire ion beam weapons systems, which the Herosine Empire did not. The ion beams, used to disable enemy craft, were among the reasons the original Devastator was popular among security forces. While the Devastator II has provisions for mounting the weapons, with the destruction of Solarwolf leaves only the Japanese Empire‘s military as the sole producers and they were not interested in export. This meant the functional loss of the Devastator’s Security Cruiser model.

Instead, the Devastator II sports a mix of armaments primarily inspired by the Devastator’s system defence model, with hyperdrive subbing in for the lost ion beams. Point-defence lasers of 900TXq are equal to the original, but are now are coupled with a point-counter measures system. (The lasers were upgraded to 970TXq lazers in the Herosine Imperial Fleet’s own Devastator II-I.) The lazer weaponry is the same as the Devastator: a single large lazer battery with 290TXq is supplemented by smaller, shorter-ranged batteries of combined 390TXq. However the original’s single missile rack and three-salvo torpedo tube was expanded to three missile racks and a four-salvo torpedo tube for standard (circa 700TXq-yield) torpedoes.

The Herosine Imperial Fleet model differs only slightly. The lazer batteries are replaced with 580TXq disruptor batteries – slightly less power output overall, but the more modern disruptor batteries have better range and bring the advantages of disrupters over the lazers in terms of damage to armour and shields. The missile racks are replaced with two three-tube missile launchers with the Herosine Empire’s standard mix of missiles and a Screen Drone bay with a pair of Screen Drones.