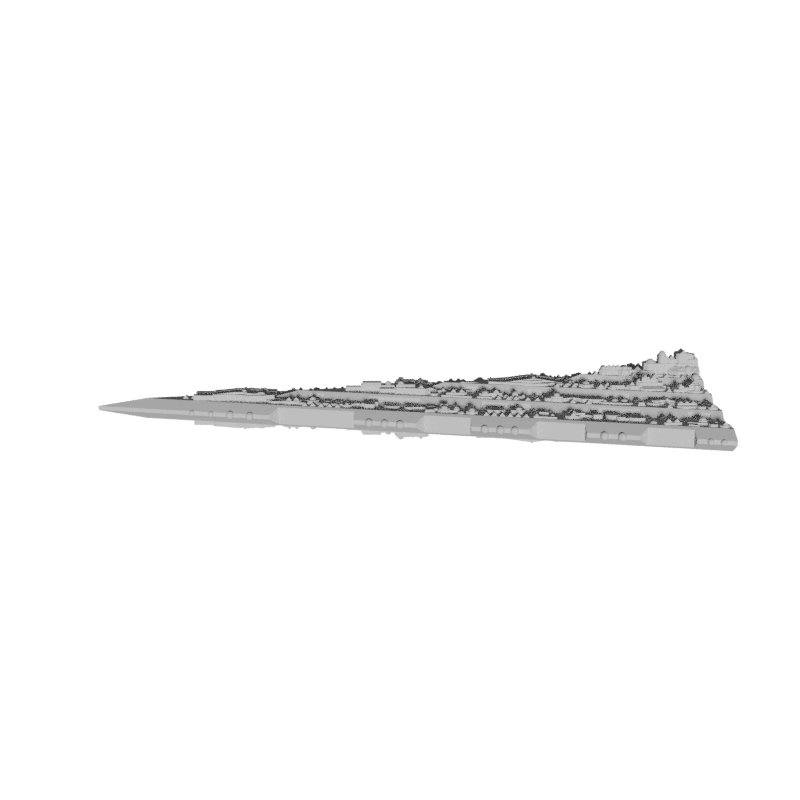 The existence of the Trajan Optimus-I Class Supercruiser was a very carefully guarded secret. In the depths of the Nathador Nebula, close to the natural hyperspace gate to the hitherto hidden Pravasti sector and its resource-rich planets, a whole new shipyard was constructed away from the prying eyes of the galaxy. The new shipyards, using new construction techniques, finally allowed the Herosine Empire to build true supercruiser hulls.

The first appeared in 2342; a new Delta-series hull a full 1500m long. The Trajan Optimus-I is the Herosine Imperial Fleet’s version, though it will doubtless not be long before anyone with pockets deep enough will be able to purchase this mammoth craft.

Due to its enormous size, General Designs Hulls cannot manufacture it even in their largest shipyards and thus it can only be produced at the Nathador Nebula facility (and thus be competing with the Herosine Empire’s own demands). It is thus likely that it will only be built on special commission and thus no “stock” version exists. This undertaking will make the vessel extremely expensive, and few customers can afford such a heavy price. Thus far, only a few vessel of this series have been seen and all are Trajan Optimus-I class vessels.

The Trajan Optimus-I breaks tradition somewhat by being named, not after the most corrupt Roman Emperors. Rather, it is named for the first, greatest (being only Emperor to truly rule) Herosine Emperor, who took his name from the earlier Roman Trajan, in the hopes of attaining the same measure of success. Fortune appeared to support his attempt, as the Trajan Optimus-I rolled out on the 200th anniversary of the Herosine Empire’s founding and Herosine Empire is stronger than ever.

The Trajan Optimus-I is outfitted with a suite of brand-new sensor and communications systems, with much better range and fidelity. The hyperdrive is refined and speed increased by 20%. It is the first Herosine vessel large enough to be equipped with spinal-mount mega-batteries – in the Trajan Optimus-I’s case, these are lazer cannons mounted above and below the largest tier, with an accuracy envelope of around a million kilometres and an output of 4050TXq.

Secondary forward lazer batteries add another 720TXq to the firepower at just over 300 000km. Disruptor batteries cover same accuracy envelope across the rest of the vessel, in total 1080TXq output.

The vessels’ defences are equally formidable. As the –I suffix indicates, the Trajan Optimus-I boasts the Herosine’s advanced shielding systems, with shields rated to 10404TXq which covers the considerable armour (AIC of 3400TXq). Multiple point-defence lazer systems give a combined output of 2910TXq over the standard 0.9Ym³ engagement sphere. This is further backed by a point-counter measure system and a hangar of no less than twenty Beta screen drones. Its size perforce makes it slow, with an acceleration of 5.1mc and only 52 MEUs, but this is still has a significant performance for such a large vessel.

The new technology ensures that the Trajan Optimus-I will be superior to the vast majority of any similar hulls sold on export.