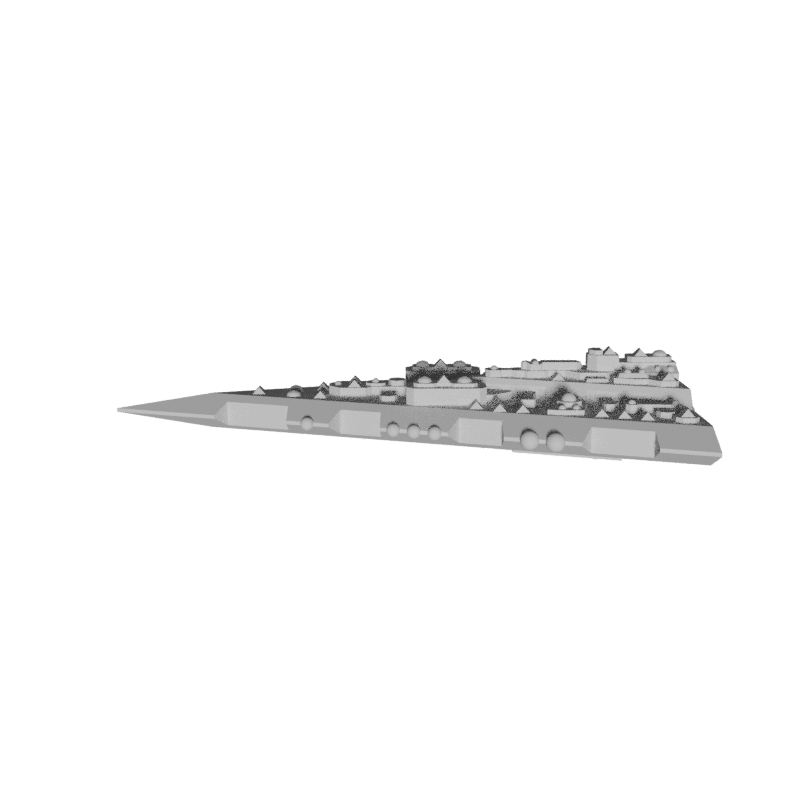 The Delta Heavy Battlecruiser is a newer hull, only being in production since 2311. A more experimental design, it has a wider profile than many of the other vessels in the Delta series. With two larger superstructures at the fore, this extra space enables it to be used more readily for an assault ship, pocket carrier, command ship or torpedo or heavy weapons vessel, while still retaining enough flexibility to be used as a general purpose warship as well.

The stock Heavy Battlecruiser is sold as an escort carrier. It has adequate engine performance: 8.2mc acceleration and it rated at 90 MEUs. 1800TXq shields provide good protection, in addition to armour with an Armour Integrity capacity of 1000Txq.

The stock version’s main selling point is the duel hangars, enabling it to carry a single squadron of fighters. The bays have only an 8m by 14m entrance, however. This can be increased to 15m by 20m at maximum, though it requires some additional superstructure work. This confines the vessel to predominately a fighter carrier – the bays are a little too small to fit any larger smallcraft. (It is not without note, however, that the Delta Assault Shuttles are small enough not to have this problem, virtually necessitating their purchase if an assault ship version is desired.)

At least one custom version has been spotted in the Herosine Imperial Fleet as the vessel of a senator’s personal guard. This version drops the carrier aspect and instead uses the space to mount two forward quad torpedo tubes and from sensor readings, appears to have bolstered the shielding to 2200TXq. This vessel also presumably would upgrade the other weapons to the Herosine fleet standard, thought as this particular vessel has not been seen in combat, this remaining speculation.