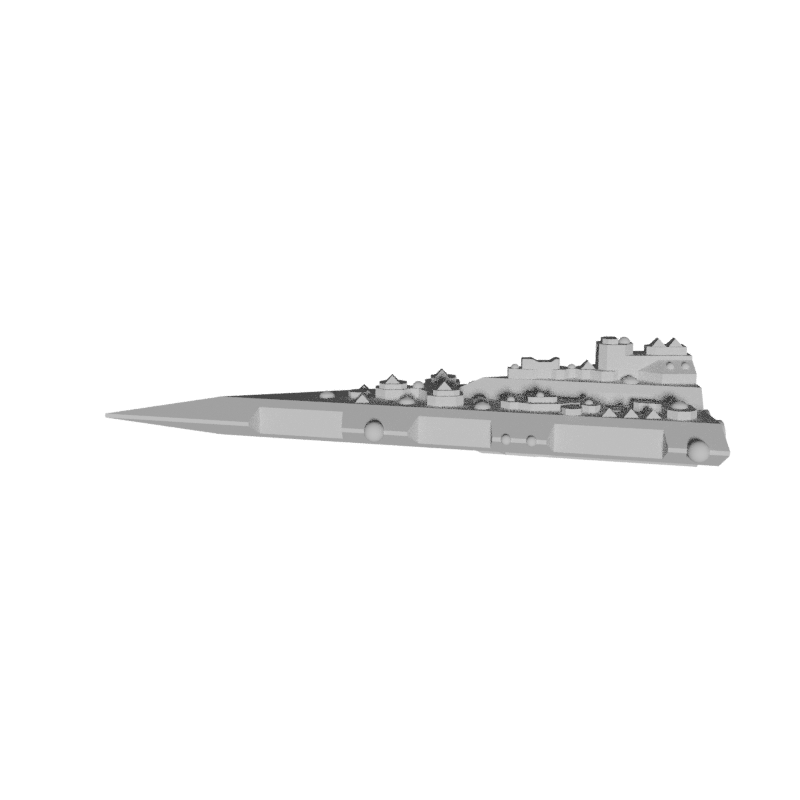 The Delta Battlecruiser was the first new Delta series hull to be constructed in the retro-engineering of the Cybertank hulls. A battlecruiser was selected as a good mid-point between the sizes of the Assimilator and Amplitude that served as the benchmarks. The first prototype necessitated a considerable degree or problem-solving. But by the time the initial program was complete, General Designs Hulls had learned enough to begin to apply the techniques to new applications in the form of the Beta series. Simultaneously, work began on down-sizing to create the Delta Destroyer.

The Delta Battlecruiser is technically only a battlecruiser in name, as strictly speaking, it is little greater mass than a heavy cruiser. Defensively, the stock model has manoeuvrability little better than a battleship with the shields not much better than a heavy cruiser. The engines are a little underpowered for its size. Its acceleration is comparatively sluggish for such a vessel at only 8.9mc, little more than the Delta dreadnought twice its size, but the manoeuvrability at 98 MEUs is rather better by comparison, though a typical cruiser will still out-manoeuvre it. Shields of 1600TXq are an improvement of the 1200TXq benchmark, but the armour is light, with an Armour Integrity Capacity of only 800 TXq.

Where it gains over a heavy cruiser, however, is in an offensive load. Lazer cannon batteries of a combined 1160TXq provide strong firepower in the forward hemisphere, though only a single 195TXq battery covers the aft, and only has two-thirds the engagement envelope of the primary guns. Three missile racks give the ship some additional firepower at range. Point-defence lasers rated to a total of 1800TXq give it solid, if unremarkable defence against fighters and missiles.

Despite its short comings, the robust and efficient design, its longevity and low price tag make the stock Delta Battlecruiser a popular design with many smaller powers.

The Herosine Imperial Fleet uses the Delta Battlecruiser as the basis for the Pertinax Class Battlecruiser (PX/BC). The Pertinax retains the shields (albeit upgraded in the case of the Pertinax-I), armour and engines of the stock Delta. The weapons are completely stripped out and replaced.

The core of the ship is a fifteen-tube missile launcher, which carries 120 200TXq-yield missiles and 80 750TXq antimatter missiles. The energy weapon arsenal is significantly reduced to a pair of 270TXq disruptor batteries, but these cover all aspects of the ship. The point-defence lasers are replaced entirely, with a point-counter measures system, a pair of 472TXq lazer point-defence batteries (485TXq in the PX-I/BC) and a hangar for six Screen Drones.

This armament improves its defences against missile attack at the long ranges that the Pertinax is intended to fight, while giving it significant firepower for when it closes to short range for the kill.