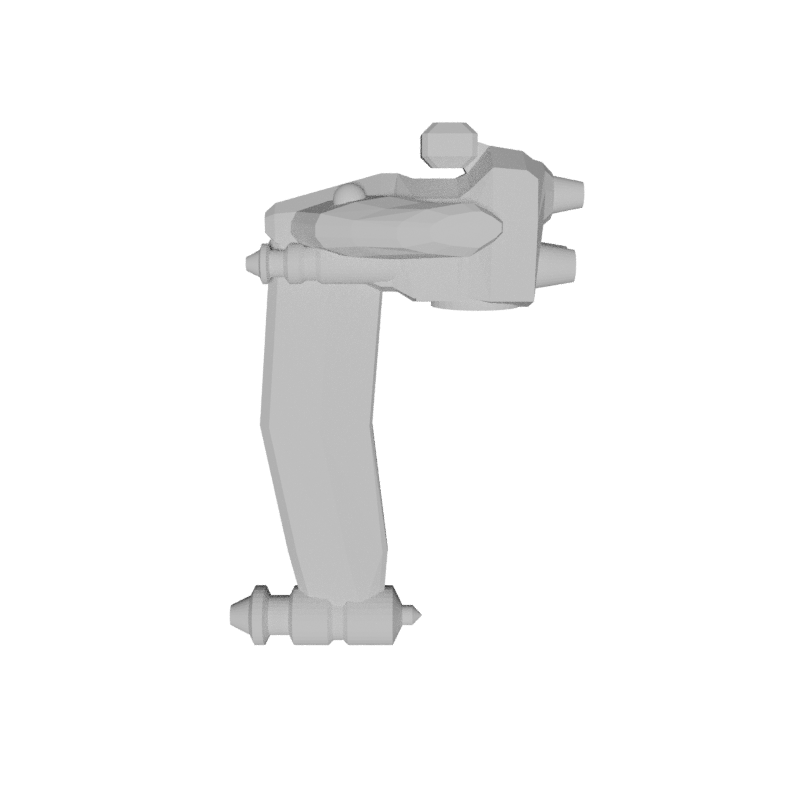 Manufactured by the BD Starship Corporation, the Rim Runner is a technically a light corvette vessel. The Rim Runner is not a true combat vessel, however, but designed as a low-cost courier for small, high-value civilian packages. Built entirely from a civilian technology base, the Rim Runner cannot perform to the standard of contemporary military craft.

It has excellent speed for a civilian vessel, sporting an acceleration of 24.08mc. The manoeuvrability is very respectable at 260 MEUs, though this is more limited than it could be, due to the stresses imposed on the vessel’s ventral keen. Despite its good acceleration, the lack of military engines mean it can only manage a safe maximum speed well below that of military craft, so even a slower-accelerating military ship will overhaul it at sublight in an extended chase.

The Rim Runner’s most notorious feature is the deep keel. This unusual design feature is predominantly a cost-saving measure. By moving the power core and hyperdrive initiators away from the main hull, it allowed costs to be cut in terms of thermal shielding. In addition, the keen serves as a thermal exhaust radiator. This feature comes with a cost of making the vessel very fragile. The limited shielding is forced over a much greater volume, and manages only 105 TXq of capacity. The exposed position makes the power-core vulnerable to attack, something which is also quite-well known to pirates. However, as ostensibly a civilian transport, combat capability is not a priority compared to purchase and normal running costs.

The most common version of the Rim Runner (the 400 series) carries only a small amount of cargo, but is armed with four fixed-forward 38 TXq laser cannons and two point-defence batteries with an engagement sphere of 0.7Ym³. This is a comparatively heavy weapons load when compared to a single fighter or even clearing debris, but woefully inadequate against anything larger. The second-most common version (the 300 series) lacks the fixed guns and has only a mere 0.45Ym³ engagement sphere point-defence system. This version can carry more cargo (though by no means a great deal) and has significantly lower maintenance and running costs.

Some planetary militias or minor powers use the Rim Runner as a light corvette. It is a role is very poorly-suited for and it is only pressed into this role due to the owners not being able to buy anything better. As such, these discount warships do not even typically attempt to replace the limited cargo with additional shields or weapons.

The sole Rim Runner designed for such usage is Rim Runner 500. This is a factory-built conversion to make the Rim Runner into a light strike corvette. It removes the fixed guns and the cargo space. The 500 model upgrades the PD systems to a military-standard particle beam system with a 0.9Ym³ engagement sphere. It also adds provision for a pair of missile racks, using the housing for the laser cannons as the firing tubes. The missiles intended to be used are surplus from prior warhead generations (typically old 150 TXq-yield warheads) and adapting them to modern weapons is not attempted, since it is generally cheaper to buy a more suitable vessel than make the more extensive modifications. With the addition of the long-range firepower from the missiles, the Rim Runner can operate from a greater distance, which somewhat mitigates its weak defences, though only to a point.