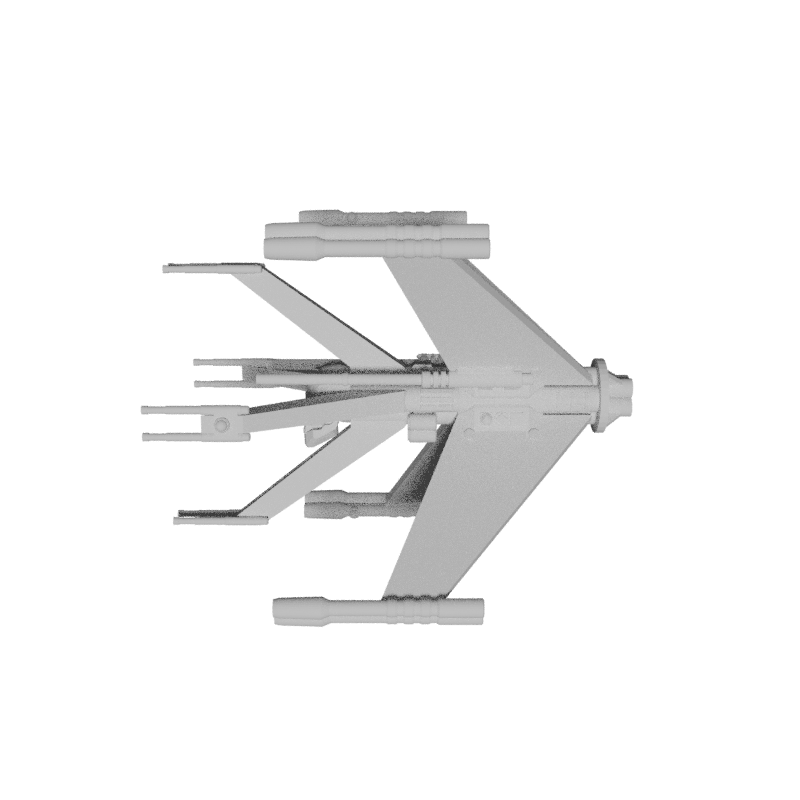 The Liche’s Wrath has become the symbol of the 10th generation Aotrs navy, and one of its most prised vessels. None have ever been lost in battle to date, and every battle they have participated in has been an Undead victory. They are popular with crews and assignment to a Liche’s Wrath is highly sought after.

Part of the vessel's success is its mobility – not many vessels of its size have such powerful engines. Moreover, it has heavy defences. The superdreadnought has very heavy shielding and extra-light ablative armour in large quantities. This allows it to take much more of a pounding than similar ships of its size, while still carrying a very heavy weapons load.

The Liche’s Wrath was initially designed to become a new secondary command ship, more mobile and less of a target than the Chillbone, Lord Death Despoil’s unique supercruiser. The distinctive four wings and four forward jutting pylons of the Liche’s Wrath all form part of a runic ritual array, like the first such devices seen in the Chillbone’s massive wings.

These runic cores, channelled by the Chillbone’s massive wing geometry, fundamentally turned the supercruiser into one giant magic “circle” for projecting powerful magic rituals. The precise nature of the rituals that would require such an enormous focus are classified, but must be formidable indeed, on a scale, perhaps, to that which cleansed the planet of G’Nayel into the Aotrs capital world, Fearmore. At a more practical level, the ritual matrix can also be used as a focussing aid to assist calling back the spirits of destroyed Undead to be restored to unlife, especially those in starship combat or ways that would otherwise be irretrievable.

The runic cores in the Liche’s Wrath as considerably more efficient and smaller, retaining proportionally more power despite the reduction of an order of magnitude in size.

The Liche’s Wrath is armed with eight fixed coldbeam cannons, two on each wingtip, and eight plasma-pulse cannons, a pair either side of each forward pylon. Numerous smaller coldbeam blisters contain anti-starship and anti-fighter coldbeams, providing a significant amount of all-around fire.

Two enormous railcannons are mounted either side of the hull. The latest advancements in Aotrs railgun technology are culminated in these weapons. On firing, the weapons impart a similar relativistic field to that of sublight engines. Without the need to deal with crew or delicate components, the massive, solid slug can be exposed to much more relativistic distortion, allowing the railgun slug to be fired at FTL speeds. The field imparted only lasts for a scant few tens of milliseconds, and is disrupted by any sort of impact. It cannot, then, actually increase the damage of the slug, but it does increase the flight speed to between two and three times lightspeed, greatly improving accuracy. The target will have moved less far in the flight time, and only computer systems advanced enough to be able to detect FTL collisions can have any hope of even starting evasive protocols. At extreme ranges, it is possible for the weapon to strike before the light of the muzzle flash reaches the target, though this is more or less impossible to witness on nondigital reaction times. The conditions of this event to occur are typically outside the railguns accuracy envelope, meaning that to even be possible, it has to be a shot against a static target. After the initial FTL burst, if the slug doesn’t strike a target, the field dissipates, slowing the slug down to “normal” relativistic sublight speeds.

The Liche’s Wrath was the first vessel in the 10th generation to be fitted with a brand-new ECM system, fully 50% more effective than the 9th generation systems it replaced. The system can provide protection for any escort vessels that are escorting the superdreadnought.

The Liche’s Wrath’s final armament is a pair of small warhead launchers on the port side.

One last trick remains up the Liche’s Wrath’s sleeve. The specific position of the weapons on the wing and pylon tips allows a Howling Void to comfortably sit nearly engine-to-skull nestled between the superdreadnought’s forward pylons. The clearance allows both vessels’ weapons to fire unrestricted, only preventing the Liche’s Wrath warhead launcher from firing any unguided warheads. This formation is of little advantage in a normal starship battle – but it places the Howling Void in exactly the right position to synchronise with the Liche’s Wrath’s runic matrices, allowing further ritual magic to be applied to the Howling Void’s thaumic lightning cannon. This is termed the “god-slayer” formation, as an upgrade to the Howling Void’s normal “god-killer.” It is not known if this formation has ever been used in anger, if so, all instances have been classified.

As with the Howling Void, a few instances of the Liche’s Wrath have replaced the plasma-pulse cannons with light railguns.

Starting in 2345, the Liche’s Wrath began to receive the twenty-five year upgrade. Recent advances in generator technology allowed the Liche’s Wrath’s power core to be upgraded. The improvement to power and reinforcement and optimisation of the engines allowed, for under a 5% increase in mass, to increase the vessel’s already considerable for its size engine output by a full third. In addition, the point-defence systems were overhauled. With the introduction of the Spiritwrack and Spectral Glow dedicated PDM ships, the necessity of the Liche’s Wrath to carry longer-ranged light coldbeam turrets was reduced, and they were all replaced with short-range versions; this also helped keep the mass increase from the generator and drive upgrade down. Finally, the plasma-pulse cannons were slaved together as on the Howling Void, greatly increasing their range.