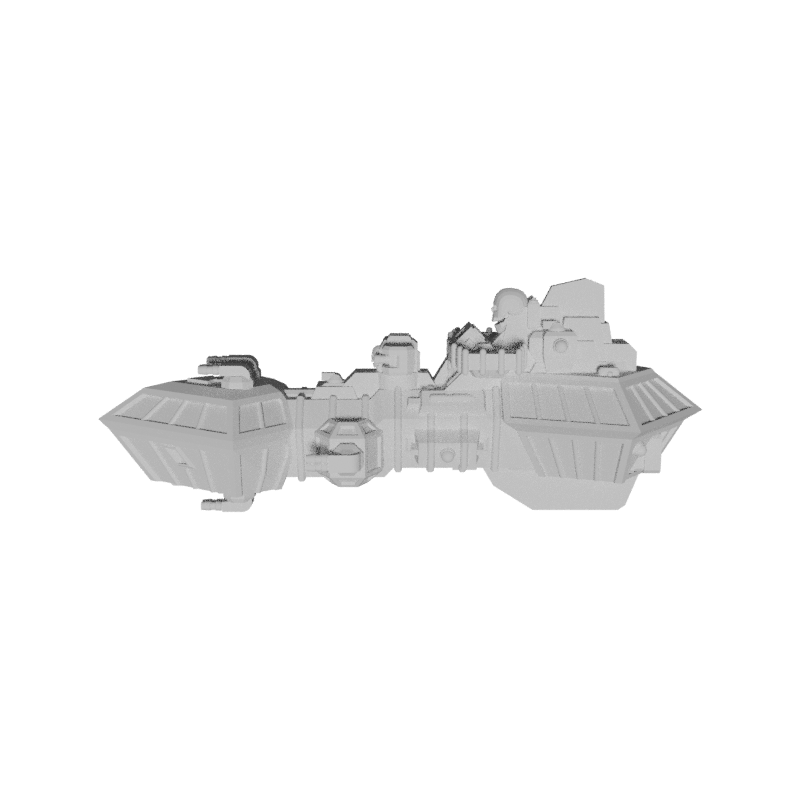 The Midnight A Dreadcarrier is a hybrid carrier/warship variant of the Midnight Dreadnought, first deployed in concert with that dreadnought in a support role. The Midnight A removes some of the turreted coldbeams (leaving it with approximately 75% of the firepower) and downgrades the warhead launchers from Class 30 to “merely” Class 20, and replaces the freed-up mass and space with a hangar bay for a squadron of fighters. However, the smaller missile magazine (where the space is devoted instead to the munitions for the fighters) means it cannot carry quite the same breath of warheads types as the Midnight.

Unlike the smaller Blackhole, the Midnight A’s hybrid nature does not lend itself to smaller operations. The Blackhole can carry the same amount of fighters and with more efficiency due to is smaller size, whereas the Midnight A would be an over-commitment of resources for doing the same sort of job. Thus, the Midnight A typically operates part of a larger fleet group. It is very rare – though not entirely unheard of – for it to function as an independent commerce raider like the Midnight does.

In this battlefield role, the Midnight A tends to carry a squadron of general purpose fighters – either the Foul Wing or the Apparition, with the former being the most common. Their role is generally the interception of other fighters, or providing top-cover to other craft like the Crater or more specialised fighters like Rends. Both fighters are capable, with a simple change of warhead load-out, of performing anti-capital ship duties if that is required, however, and the Foul Wing’s standard weapon load-out allows it some measure of capability against all types of targets regardless.

Despite the downgrading of the Midnight A’s anti-ship armaments, it remains a serious threat, especially when acting in tandem with the escorts and warships it is supporting. The Midnight A still carries the dorsal energy beam cannons, so is quite capable of slicing enemy ships apart, though without support, its shield-stripping power is not as great as the standard Midnight. That said, with its squadron of supporting fighters to assist, the Midnight A is better at dealing with targets with more active defences, since it forces them to split their point-defence between the incoming missile volleys and the strafing fighters.

The Midnight A and the Blackhole remain the Aotrs’ main carrier craft, with the rarer and larger Death Swarm Battle Carrier performing closer to a more traditional fleet carrier role.