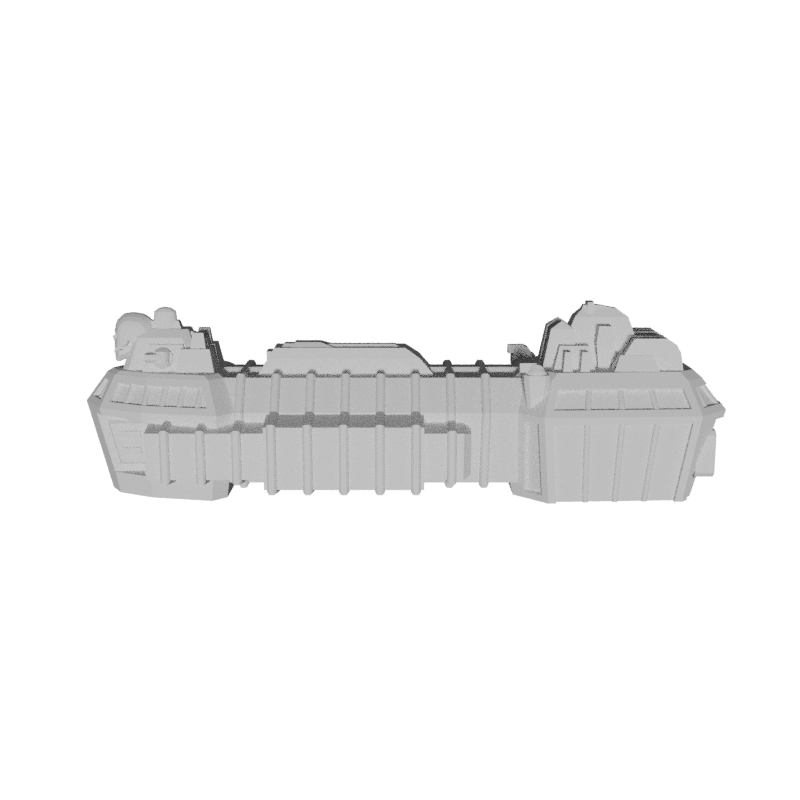 Transporting troops across the stars has always been the Aotrs fleet’s primary task since the 1st Generation of starships. In the 10th Generation, the Crypt Bearer takes on the majority of this work. The Crypt Bearer can house a division of ground forces – in comfort, unlike many such troop ships – for the long periods of off-combat operations. The smaller starboard hangar bay of the Crypt Bearer’s two hangars houses a squadron of fighters, to provide top-cover. The port hangar bay can carry a variety of assault ships; Fallen Souls, Dirges and Murders. Of one the more common configurations is to forgo typical shuttles to allow the Crypt Bearer to house four Murders. Crypt Bearers frequently carry Apparitions as the top-cover fighters, simply so that the top-cover is not left behind by the Murders. This allows the Crypt Bearer to transport two-thirds of its troops in one go. In addition, the numerous multiple additional Gate rooms enable the Gate transit from ship to surface or ship to ship half of its quartered troops, or a quarter plus its own assault teams. Rarely is this full capability called for, however; but it can be a very unpleasant shock to an enemy vessel getting too close to a Crypt Bearer. Aotrs Gate technology is capable of penetrating all but advanced shielding, and several companies of boarding troops appearing simultaneously is enough to concern any vessel.

This enormous transport capacity means the Crypt Bearer does not have to linger long in a deployment zone, which reduces its exposure to enemy attack. The Crypt Bearer is capable of a fair turn of speed for an oversized transport, but can only out-run larger and more cumbersome capital ships. Its defences are average for a ship of its size – but that means it has little more than half the armour and shields of the slightly larger and very well-protected Midnight. While it has numerous point-defence coldbeams, these are only best to stave off missile attacks or discourage fighters, but they are no substitute for an escort. The Crypt Bearer’s main protection, then, is simply not being in a position to be attacked from very long.