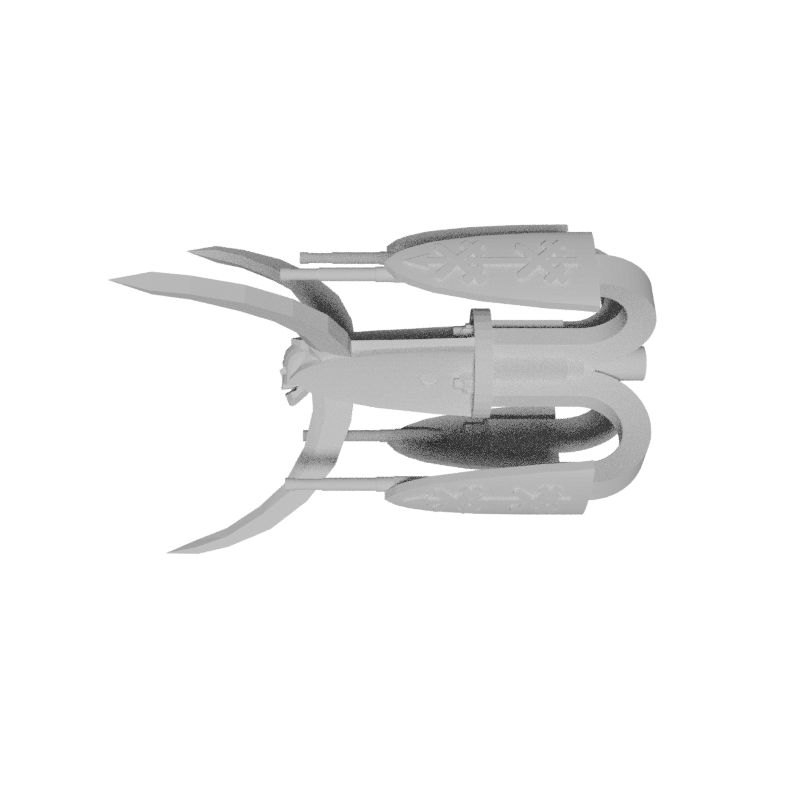 The Howling Void’s most notable features are the three scythe-like blades projecting from its forward superstructure. These form the generating core of the Howling Void’s thaumic lightning cannon. Introduced in the late 9th generation, the thaumic lightning cannon – often referred to inaccurately as an “electroblaster” after the groundside lightning-shooting infantry weapon – is only dedicated magical starship weapon in the Aotrs arsenal. While warheads and occasionally other weapon systems can be enchanted to be magical, the thaumic lightning cannon is the only weapon to be inherently magical in effect. When activated, the internal runic cores channel magical lightning down the three scythes from the tip and into the hull, concentrating the power at the maw of the skull and discharging it as a single spectacular blast. (Which can be quite disconcerting to nonmagical opponents under the impression lightning is an atmosphere-only effect.)

The enchantments are much more complicated than merely allowing lightning to function in a vacuum or even be magically charged. Like a highly-enchanted magical blade, the lightning cannon’s discharge carries all manner of debilitating magical rider effects. These could have been placed on almost any elemental energy type, but the optimal efficiency and carrying form for the specific combination of enchantments favoured electricity. The magical optimisation allowed the thaumic lightning cannon to function as a normal starship weapon at all other times. Most of the enchantments are of limited effect against a starship, rendering it overall no more effective than a normal starship weapon against such a target, but make attacks on specialist vessels – or large living entities – considerably more deadly. The efficacy of the weapon is also considerably improved when fired into atmosphere (and extraplanar space with atmosphere), where the lightning doesn’t have energy lost to propagating in space. The weapon is informally labelled a “god-killer” and indeed such extra-planar magical creatures are one of the weapon’s potential targets.

The Howling Void’s other weapons are more mundane. The rear shield-pylons each house a short-range plasma-pulse cannon. A trio of warhead launchers nestled in the hull fire through the gaps in the lightning pylons, and numerous light coldbeam turrets provide point-defence.

Following the success of the Frostbeam A refit, Aotrs engineers attempted a similar procedure with the plasma-pulse cannons in 2345, as part of the twenty-five year design overhaul. While not quite as successful in slaving all four together, they manage to slave them into pairs and the range was likewise increased. The initial tests managed to get three working as a single weapon system, but the remaining weapon suffered. Work is underway to improve the technology further, and it is likely that before the end of the 10th generation, the Howling Void will have a second upgrade. All current Howling Voids have been updated to the new standard.

A handful of individual Howling Voids replace the plasma-pulse cannons with light railguns, trading their short-range higher-damage weapons for a longer range.