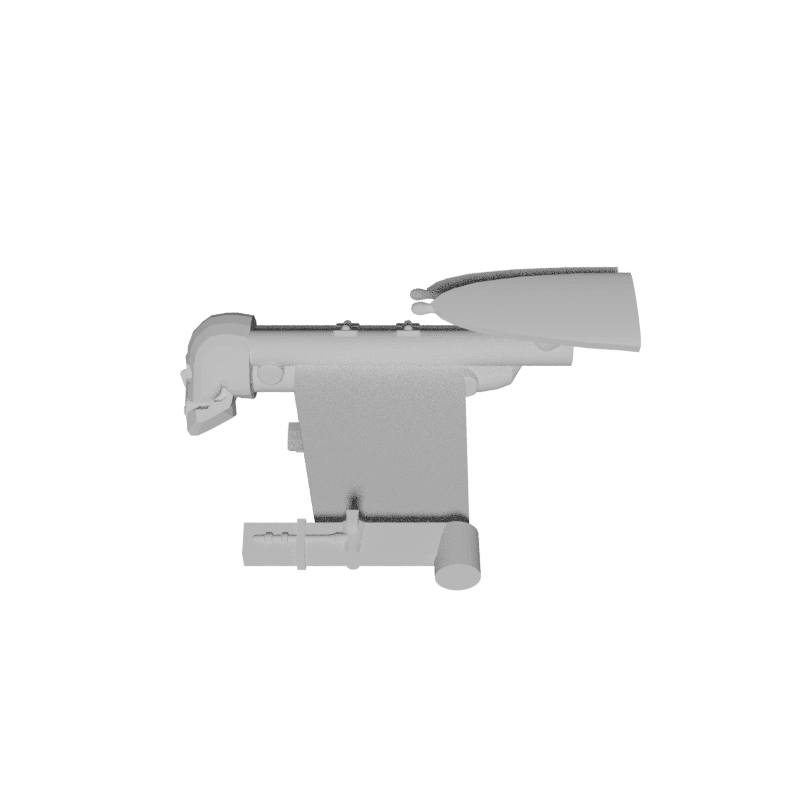 The Bloodsteel is primarily a heavy warhead platform. Sporting currently the largest warhead launcher class in the starfleet, fully 20% of the Bloodsteel’s mass is taken up by those weapons. A torpedo from one of the Bloodsteel’s launcher can smash through a typical vessel’s shield and armour and deep into the hull almost as well as a heavy railgun slug, and even if the vessel survives, there is a strong chance the impact will send it spinning.

The Bloodsteel is an early 10th generation warship. The position of the warhead launchers on wings echoes the position of the massive coldbeams on the wingtip of the Chillbone and Liche’s Wrath – and for the same reasons. While the typical 10th generation warheads are not themselves volatile, the Bloodsteel’s mission profile is designed to accommodate a wider variety of munitions than the other warhead-carrying vessels. This includes and custom-built or situational warheads; which often can be volatile. Secondly, as on the Chillbone and Liche’s Wrath, the wings serve as runic core to focus enchantments. In this case, the Bloodsteel’s are all focussed towards bestowing appropriate magical effects to the warhead launchers when required – meaning the Bloodsteel can fire, quite literally, magic missiles. The occasions where this is necessary do not come up often in starship combat, but are another weapon in the Aotrs arsenal against potentially marauding divinities or extra-planar threats.

Safe, conventional munitions are carried in magazines under the wings. With a little artful manipulation of internal gravity to orientate it parallel to the wing and perpendicular to the launcher, the Bloodsteel’s massive magazines can rely on mechanically-assisted gravity feed – making it one of the largest gravity-feed weapon systems in the galaxy.

The Bloodsteel carries some medium-range coldbeam turrets to support its warhead launchers, and numerous coldbeam turrets for point-defence. As a high value target, it has strong evasive capability, powerful shields and a point-countermeasures system to further protect it from missile fire.