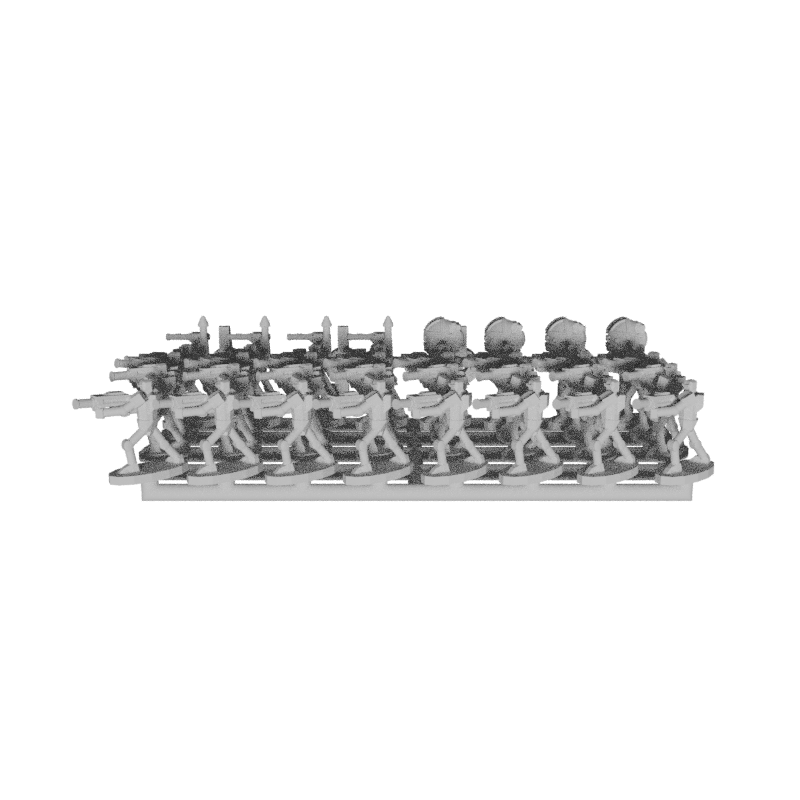 32 Legionaries with rifles (eight sets of four poses) plus four Psiloi orb scouts and four Centurion heavy footsoldiers. (Enough for four squads of one Centurion, one Psiloi and eight rifles.)

The Legionary is the backbone of the Herosine Empire armed forces and has been for over a century. The Herosine Empire has used droid or robot troopers since its inception. The Herosines are light-years ahead of the competition, with only the most advanced races and those who are inherently technological having better quality troops. The Army Of The Red Spear first bought its War Droids from the Herosine Empire before it began working on its own, and the design lineage is still evident in some of their internal architecture. In some respects, the AI of the Herosine War Droids is now better than that of the Aotrs: the Herosine droids do not have the same command and control limitations as the Aotrs troops do.

In the 2330s, the Lg-I/FS Mark 6 model began to replace the older Lg/LS Mark 5s. The major difference in the newer model is the application of the Herosine’s latest Scutum Mark 6-I shield, providing better deflection and penetration resistance for the same power output as the older Scutum Mark 2. Many units of Mark 5s are also being recalled and converted with upgrade kits to the new standard.

Legionaries are typically armed with either Herosine Arms semi-automatic disruptor rifles, automatic blaster rifles or plasmatic repeater rifles, depending on what their role is intended to be. They can, however, use any two-handed energy weapons with the same proficiency thanks to their programming: some units are equipped with longer range weapons like lazer rifles or – for particularly affluent masters – disintegrator rifles. They also possess basic internal scanners, but rely mainly on attendant Psiloi Orb Scouts for those duties.

Legionaries are typically programmed with some basic technical skills – most often gunnery or heavy artillery skills. They also typically have some “space” left aside, which can be programmed to other skills (for ground forces, this typically means command or AFV piloting skills).

The Psiloi is as venerable as the Legionary. For over a century, the Herosine’s ground forces and naval marine detachments have been supplemented with the familiar sight of the Psiloi Gravitic Orb Scout.

The Ps-I/GOS Mark 7, rather than an upgrade as with the Centurion and Legionary, is more of a new machine. While the basic structure is the same, the Mark 7 has a superior alloy armour surface. It replaces the old GOS Mark 4 shield generator with a new GOS Mark 5-I. The new Mark 5-I, in addition to being an upgrade with the newer technology, provides an all-around shield, unlike the forward-only barrier of the older GOS Mark 4. While the GOS 4’s exceptional output-to-consumption and weight ratio has kept it in service for so long, the new Mark 5-I provides 75% of the power output, but to all facings, rather than just the fore. Combined with the new armour, while the Psiloi is now 5% less protected from the fore arc, it obviates the Psiloi’s biggest – and well-known – weakness.

This design change has required a re-modelling of the Psiloi’s internal structure and a stronger power core and drive to lift the greater weight due to the armour.

The Psiloi is equipped with two frontal blaster pistols. It is outfitted with a suite of electronics, from a full sensor array, allowing it to designate for other Herosine missile vehicles. An EM and stealth suite that allow it to hide electronically from sensors. While short of a cloak and not fool-proof, it does grant the Psiloi considerably more ability to sneak around. This, combined with the Psiloi’s default suite of skills (unlike the Legionaries, the Psiloi is usually “full”) pertaining to stealth, threat detection, navigation, computer and hacking skills and even basic assassination skills allow it to be a significant threat to all levels of enemy grounds forces.

Compared to the Legionary and the Psiloi, the Centurion is a relatively late addition to the Herosine Droid arsenal. It replaced the older Decurion Heavy Footsoldier, which was purely a heavy weapons platform.

The Centurion is not, as the inexperienced sometime assume, a command unit, given their typical deployment as one to an infantry squad, but a special weapons element. While the Decurion it replaced only carried a support weapon, the Centurion mounts four inbuilt weapon systems, capable of engaging foes at all ranges.

On the left arm, it mounts a Herosine Arms automatic subassault lazer. Capable of engagement up to 500m, this is the Centurion’s main anti-infantry weapon. On the right, it carries a twin flame-pistol mount for close range urban clearance – or any other duties which require a flammable target to be set alight.

The remaining two weapon systems are mounted on its back, and rotate down over the shoulder when firing. The right-hand mount is particle accelerator cannon. The cannon are designed for continuous firing, drawing a steady amount of power from the Centurion’s power core for extended usage. It is an effective weapon against dispersed targets like infantry squads (owing to the fact it can be swept over an extended area), but is ideal for dealing with light point-targets such as powered infantry or other shielded droids.

The left mount is a missile launcher. This is typically outfitted with a standard Heavy Infantry Missile (typically rated at Tier 17) for use against armoured targets, though ship-board Centurions use one with a lesser penetration or a high-explosive warhead to avoid too much structural damage.

Centurions are typically fielded one to an infantry squadron of eight Legionaries and a Psiloi. Due to their vastly greater expense, it is rare to see more than one in a unit; however, personal bodyguards of ranking officials or special tank-hunting teams are not unheard of. Despite having a more advanced AI, Centurions are primarily designed for combat operations, and thus do not have much “spare” programming space for other skills to be added. In the latter case, this means that the usual squad numbers are reversed: eight Centurions in a squad with a Psiloi and a programmed Legionary acting as squad leader.

The latest model coming in the 2330s is Cn-I/HS Mark 4. This upgrades the Scutum Mark 5 to the newer Scutum Mark 7-I. As with the Legionaries, the older Centurions are undergoing refits to the current version.