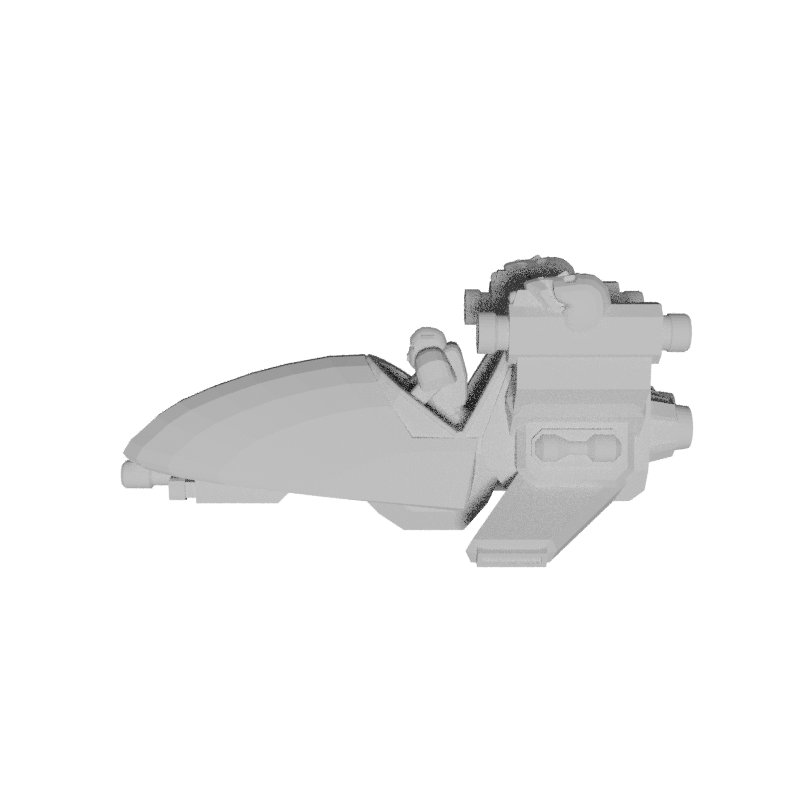 The Scitalis is the most recent addition to the Aotrs ground force arsenal. Developed under the working title of Serpentskull recon cycle, it replaces the Viperskull jetbike and the Bone Cracker and Bone Smasher Recon Cycles.
The increased use of Hunter and Sentry Drones in front-line reconnaissance has not obviated the need for the deeper recon operations which have always required skilled troops. The various bikes and cycle over the years have fulfilled this role. But these vehicles have always had drawbacks. Firstly, they were never well-protected. Over time, the size of the vehicles also grew larger, to accommodate new technology. (Indeed, it has been a long-standing joke that the recon “bikes” have been for some time longer than a typical saloon gravcar.) Secondly, due to the differences in physical size of the armour, Power Troops required their own special vehicles, simply due to the problems of seating.
The Scitalis was developed to deal with both problems, and to combine the best elements of the three older cycles. For such an advanced vehicle, it is perhaps ironic that the most innovative feature is nothing to do with its combat or recon abilities, but due to something as mundane as the seating. The Scitalis’ seats are built entirely from a new-type of hard-code-locked nano-elements. The nano-elements have very few metallic components, being predominantly compressible polymers. With simple adjustments on a small control pad – which requires no external power and is about as analogue as such a device can be – the seating can be configured so it is suitable for either Power Troops or regular infantry. For a regular-sized passenger, the seat is a little higher and closer to the controls. This adjustment can be fine-tuned further to an individual’s settings and the distance of the control panel itself can be moved forward or backward, making for a very comfortable ride. At a squeeze, two normal-sized humanoids can fit on the seat, though regular infantry in full gear would be pressed to do so.
The Scitalis has continued the trend of larger size, being slightly larger than its three direct predecessors. But it combines the flight capability of the Viperskull, the sensors of the Bone Cracker and the offensive capabilities of the Bone Smasher, all in one package. Partly, this size is also necessitated by the addition of a bubble canopy. This was, in part, inspired by the Strayvian Dominion’s Seething Scoria Attack Skimmer. The other reason was the development of the new shield-grid coating in 2342. A sealed pilot compartment means that, for the first time, a cycle can be equipped with shields.
The Scitalis is capable of full orbital flight in addition to the nap-of-Earth grav operations. The Scitalis has both more modern and powerful engines than the older Viperskull, but the addition of the canopy further benefitted it in this regard, whereas the older jetbike has a limited service ceiling. It is, in essence, now more akin to an undersized one-lich fighter craft than a traditional “recon bike.”
The Scitalis is equipped with an up-to-date sensor package and ECM system. It is also much more heavily armed than the older bikes, containing essentially all their weapons. It carries a single spinal-mount Coldbeam cannon, slightly less powerful that the twin Coldbeams of the Viperskull. This is flanked by a pair of light Plasma-Pulse cannons (as the Bone Cracker had) for shorter range engagements and considerably more hitting power.
The Viperskull’s rarely used lower wing-scythes were almost dropped from consideration, but the veterans consulted felt that they were still a useful addition for some purposes – more for engineering tasks than actual combat. Rather than use physical blades, however, the Scitalis has two much shorter wing-stubs which serve as emitters for a scaled-up version of the Cold Blades used as infantry melee weapons. This grants much more effectiveness in usage, though the Scitalis’ power generator chugs a little when trying to run them simultaneously while flying with active shields and both energy weapons firing.
Finally, it carries a pair of SK series Snake Missile Launchers (like the Bone Smasher) with five warheads each, which give it a limited, but not insignificant, anti-armour punch.
The Scitalis initially received an uncertain reception from the first units to whom it was assigned, but this first impression was solely based on the size and the addition of the canopy. Once the veterans had had a chance to out it through its paces, the reception has been unilaterally positive. The Scitalis is being deployed as fast as it can be produced, with the older Recon Cycles being regulated to the secondary Dark Elf Trooper forces or decommissioned altogether.