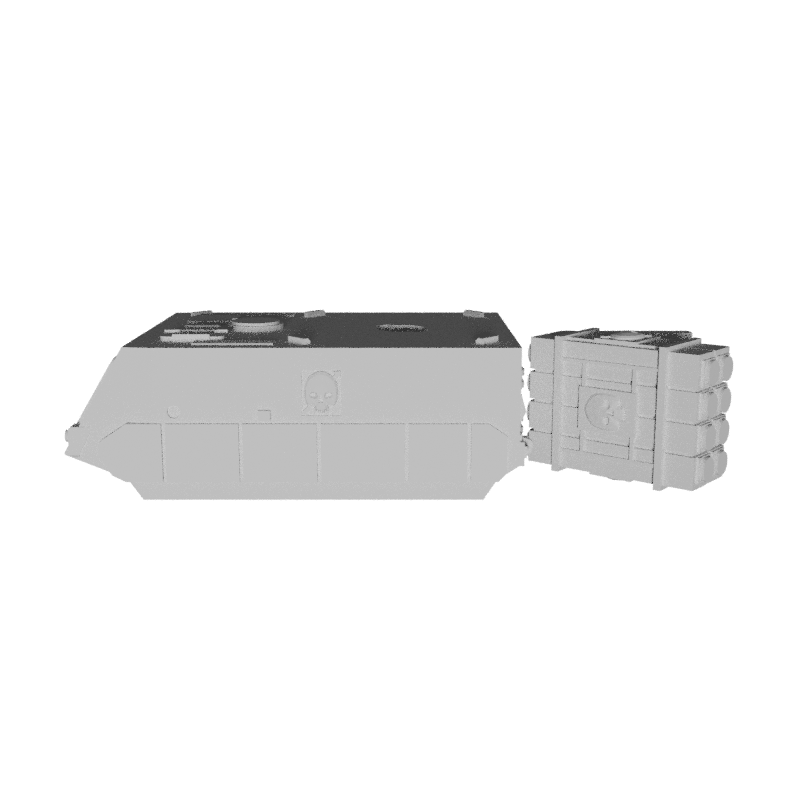 The Vampire Lord is a successful conversion of the anti-grav version of Vampire APC available on the general market. Dating from the end of the supercruiser era, this Aotrs variant stripped out the power core and replaced most of the systems with superior Aotrs equivalents. The Vampire lost half the space for the infantry carried – down to a comfortable eight (a dozen at a push) from sixteen – to install the quad pulse-fire coldbeam cannon turret mounted on the roof.
For over two decades, the Vampire Lord was the Aotrs’ primary APC. The introduction of the Fallen Soul in 2327 replaced it in the role of general APC. The Vampire Lord remained in service while the Fallen Souls entered full production and deployment. It was gradually replaced, starting with front-line units who benefitted most from the Fallen Soul’s superior durability. But this was not the end of the Vampire Lord.
By the time the Fallen Soul emerged on the scene, there was a second Vampire derivative. The Vampire Horde is a variant of the Vampire Lord that replaces the coldbeam turret with a salvo launcher for the Horde semi-guided warhead system, giving application for use in strike, anti-tank, anti-personnel and anti-aircraft roles, while retaining the infantry carrying capacity. A further subvariant of the Vampire Horde, the Vampire Horde Doom, traded all its infantry capacity for additional ammunition space. The Horde Doom was used in supplementary AA and Anti-Tank roles, though it was also successfully used to support missile patrol boats in wet-naval engagements on soft targets.
In the 2330s, the Vampire Horde saw the most usage of the Vampire variants; the Vampire Lords were being steadily regulated to support or second-line roles. As the Horde Doom was a relatively simply conversion to weapons carrier, the potential to change both Vampire Horde and Lord to similar weapons carrier was discussed. Plans began to extending the design’s life by adding a dedicated AA tracking suite to both Lord and Horde and them and turning them into a proper company AA vehicles, a role they were already starting to fill. It was questioned whether, especially in the case of the Vampire Lord, the removal of the infantry capacity could be used to add in a shield generator, though it was acknowledged that this would require a replacement of the Vampire’s current power core, and would not benefit the Vampire Horde, so the plans was stalled.
But during the latter half of 2342, a brand-new innovative technique was developed, allowing a shield grid matrix to be quite literally painted on to the hull. Advances in power plant technology now allowed the requisite upgrade to the power course to handle the additional load of shields but without any additional mass. This new shield matrix was pioneered on the Vampire Lord and Horde, but was soon applied to other, older, unshielded vehicles like the Distant Thunder and Reign of Anger.
Is it planned that only a few Vampire Lord and Vampire Horde versions will be retained with their infantry capacity as light IFVs for special operations. The remaining Horde vehicles will be converted to Horde Doom versions and the Lords to a new Lord Doom version, where they will serve as dedicated AA vehicles. This Lord Doom replaces the infantry bay with a larger power core, allowing it to carry 20% more shields than the other versions, and allow the coldbeam turrets to be upgraded with new, modern 11th generation pulse-fire coldbeams that increase the range to three times the Vampire Lord’s and increase the power output by an impressive 75%.
The Vampire Lord and Horde’s new coat of paint will once again bring the vehicle into the front line. Nor is this just a figurative statement; the new shield matrix is coloured so as to replace the Vampire Lord’s original mist-grey colouration with the current rust-and-gold livery