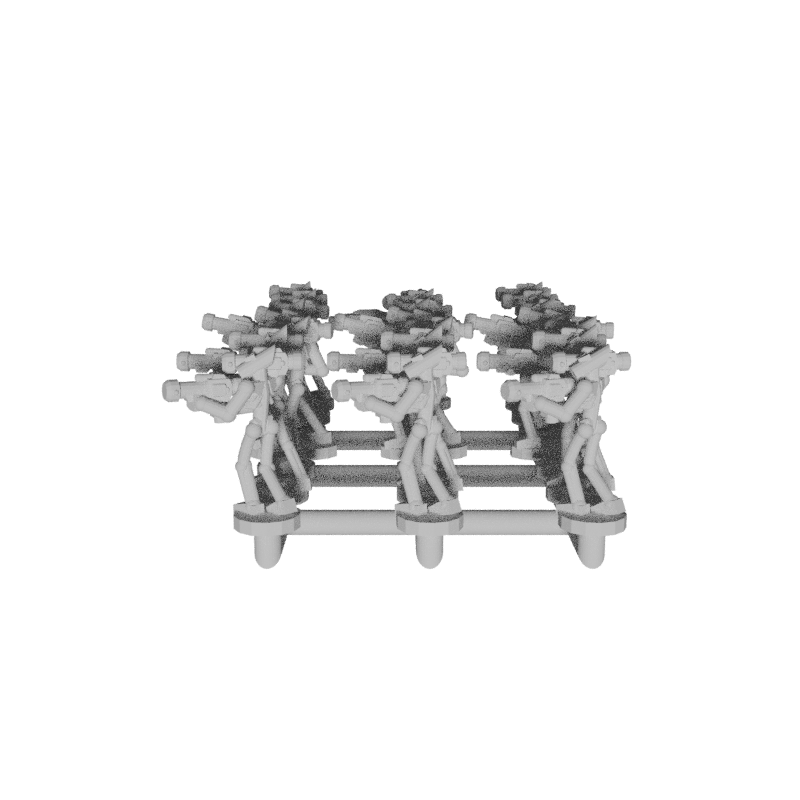 Despite the vast number of Undead under Death Despoil’s command, they frequently find themselves outnumbered. And there comes a point where a minimum number of bodies are required to undertake a task – no matter how elite a unit might be, one lich cannot be in more than one place at once.

In the pre-industrial ages, this factor was mitigated by the low speed of travel; teleportation or flight was not something that could be undertaken easily or en masse. Until the dawn of the Information Age, the Aotrs’ only recourse was to field living troops to supplement their forces. Animated Undead, while never as effective as popular culture has traditionally believed, were still a largely viable, if limited, battlefield weapon. But as time advanced and technology improved, transport speed and complex weapons became the norm and the need for bodies on the field increased and the usability of Animated Undead dropped sharply.

Finally, in the early FTL age, robotic troops became a viable alternative. But it was not until the 2190s, when the Aotrs imported the 1st generation War Droids from the Herosine Empire, that they became a significant arm of the Aotrs ground forces.

War Droids are simply non-spirit bound humanoid battle robots. The original War Droids were bought – like much of the arsenal at the time, as this was during the supercruiser era – directly from the Herosine Empire’s arms merchants. Since then, the Aotrs have steadily switched over to the on internal production. Unlike the Herosine Empire, which has sufficient wealth it can throw out bleeding-edge top-of-the-line equipment and still treat is as disposable, the Aotrs has had to take a more circumspect approach.
Modern 4th generation War Droids are comparatively easy to mass produce (in comparison to training up new soldiers), and can be transported in large numbers easily. They are relentless troops, but focussing on cost-effectiveness over efficacy means that their intelligence and initiative is somewhat lacking. To be effective, they have to be controlled by a dedicated command droid (which has a superior and more expensive to produce brain), which is attached at the top level of an attack force, to avoid the possiblity of conflicting orders.

The 4th generation War Droids have heavy shields and are armed with Plasma-Pulse weapons. They carry a standard PP-1A Plasma-Pulse rifle. A second weapon is mounted over the right shoulder – this weapon has comparable power, but slightly shorter range but higher rate of fire. They are typically fielded in a group of six.

The command element is usually three; the command War Droid, a regular War Droid as "bodyguard" or for assistant duties and one War Droid armed with a heavier PP-3A plasma-pulse cannon. The War Droid Command element typically supervises between two and four squads of War Droids or Hunter Drones and/or an attached platoon of Enrager Heavy Assault Droids. The command droid is of a slightly higher quality of AI, though it is still not sufficient for doing anything other than co-ordinating with regular Aotrs forces. (Though alone, they can still provided an adequate, if uninspired commander.)
War Droids are treated as fundementally disposable, but they are numerous enough that they often comprise half of a typical Aotrs ground force infantry deployment.They are used primarily as recon-by-force or as a pinning force, holding enemy infantry units in place with their extensive fire to allow the more capable Aotrs Line Infantry to close in to mop-up.

Aotrs plasma-pulse weapons have about a third to a quarter of the range of coldbeam rifles, but this is a comparitive disadvantage – the PP-1A still has a respectible range of 525m, still very comparible to non-railgun projectile assault rifles and conventional plasma weapons. The War Droid’s ability to accurately shoot was notoriously poor at longer ranges in prior generations anyway, so equipping them with longer-range weapons would be wasteful.
The high volume of fire makes War Droids very good at suppressing enemy troops; not only do their shields require concentrated fire or the deployment of anti-vehicle weapons to penetrate, as they have no fear, the cannot be suppressed themselves and have to be destroyed to stop. While this means that War Droids also do not really utlise cover in any meaningful sense, their shields are armour go a long way to compensate for this – and while the enemy is busy shooting infantry anti-tank warheads at the approaching shielded robots in between showers of plasma-pulse bolts, they can’t be shooting them at approaching (and much more valuable) Aotrs troopers!

The War Droids are themselves poor choices for close assaults – at those ranges, their shields are of only minimal usage (since a typical close assault’s sustained fire will not allowed them to recharge and they are much easier to flank ). They have very poor close combat skills, only marginally better than most Animated Undead. Indeed, a close assault by the enemy is often one of the most effective ways of dealing with a War Droid unit.

As they are not equipped with any anti-vehicle weapons themselves, War Droids are also vulnerable to vehicles and vehicle (and anti-vehicle) weapons. However, at very close ranges, plasma-pulse weapons can still be dangerous to light targets in certain circumstances – in one recorded instance during the Muisis campaign, a squad of War Droids destroyed an enemy MBT from the upper story of a building by leaning out to fire down on its poor top armour. It was a lucky hit, but still demonstrated the danger.