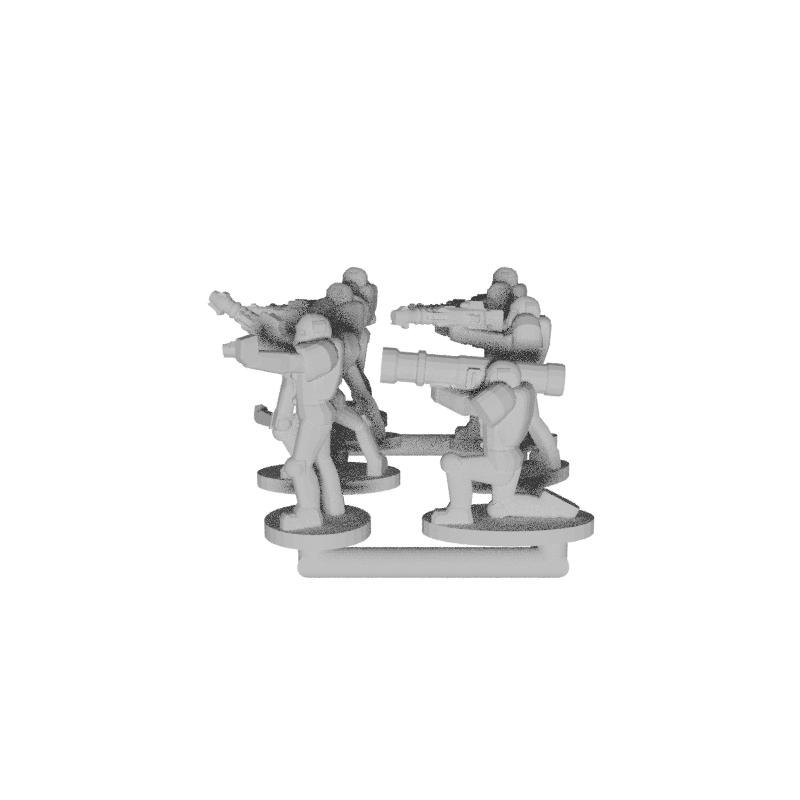 As is often the case with powered infantry throughout the galaxy, the Aotrs Power Troops are the elite of the ground force. The Power Troopers themselves are the cream of the infantry, and are exceptionally dangerous. They perform all manner of duties from normal ground combat to deep space boarding and anti-ship/ anti-installation (ASAI) operations. Power Troops are rarely seen deployed in full platoons. The fluid nature of Aotrs infantry deployment (transport vehicles are not permanently attached to infantry units) means they are more often seen in groups of one or two squads. Due to the larger size of the armour, Power Troop squads consist of four troopers, half the normal number that comprise the Aotrs’ Line or Drop infantry squads, so a pair of squads and two transport vehicles (often a pair of Fallen Souls or Vampire family vehicles) is the most commonly seen deployed unit, with a support weapon and a Snake Launcher between them.
The Aotrs Power Troops wear the Aotrs’ Heavy Powered Armour suit. The HPA has shielding systems, and is very tough and capable. Not least this is because they lack of life-support systems, and the extra mass this leaves free. The suits are sealed and pressurised – principally to keep out corrosives and allow the trooper within to be able to speak – but they have no other life-support capability as standard. This leaves Power Troops the exclusive domain of the Undead – while HPA suits for the Aotrs minority of livings beings exist, they are used only by individual specialists, rather than as part of a main battlefield unit, due to the additional mass and cost increase. Like all Aotrs armour, HPA suits are magic-permeable and do not impede spellcasting.
HPA suits do not have any mounted guns as standard; the troopers carry any weapons in their hands. The armour’s systems give the pilot even more strength, and they can carry even bulky support weapons with little problem. The suit is not entirely unarmed; there is a Cold Blade array built into the right gauntlet, meaning the troops do not have to carry melee weapons with them if they do not desire. They have advanced sensor and computer systems, and the pilot is aided by computer-assisted targeting. Furthermore, the gloves have magnetic clamps, so it is very difficult to drop a held weapon, or be disarmed.
The HPA suits have gravitic systems, and are capable of being orbitally dropped. They can even fly for limited distances. In space however, they are fully mobile, and fill the role of deep space assault. In this role, they will sometimes have extra mounted weapons mag-clamped to the armour’s back unit, under the shields (something that is impractical to do when moving on the ground, in atmosphere). These will often be a pair of HR Harridan series warheads, but single SU Skull series anti-ship warheads have been used on occasion.
Power Troops have, perhaps surprisingly, seen long-service with reconnaissance units, where they were often mounted on Bonecracker and Bonesmasher Recon cycles, which were specifically sized to allow them to be ridden by the bulky powered armour. For some decades, the recon cycles have worked in tandem with the Viperskull jetbikes used by the Line infantry, where the recon cycle’s ability to hold the less vulnerable Power Troops was compensation for their lack of flight. All these vehicles are now being phased out. The increasing usage of both Hunter and Sentry Drones has reduced some of the necessity for the roles that those light vehicles had. Brand-new shielding techniques and an innovative new seating system has further allow all three vehicles to be replaced by a single new, shielded grav cycle – the Scitalis – that will configure to allow a rider to be wearing any armour.